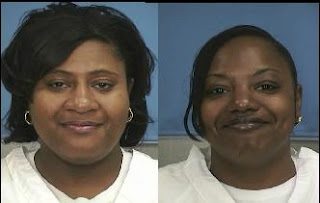 The nation’s attention is focused on the torture memos released by the Obama administration. Everyone is debating whether or not to investigate the previous administration for human rights violations. But the practice of torture didn’t begin with the Bush administration. The founding of this nation included the use of torture to coerce compliance from the Native Americans and to enforce slave laws and control huge populations of Africans and their descendents.

Now a nation that can not decide what to do with members of the judicial branch who provided a narrative, drawing from legal history and cultural productions that always decreed the U.S. the right to violence for the protection of its citizens, finds itself haunting by past aggressions (Operation Phoenix, Japanese interment camps, death squads in Latin America).
Citizens are calling for accountability.

But since 1993, in Mississippi, two sisters, Jamie and Gladys Scott, sit awaiting an investigation, awaiting accountability by the same justice apparatus that sentenced them to double life each for a crime they did not commit. The sisters had no prior convictions. They are waiting to hear from the new administration’s Attorney General, Eric Holder. They are still waiting.

Similar to the encompassing judicial narrative in Washington D.C. permitting CIA operatives, military officials, and private contractors to engage in torture in the Middle East, the legal narrative in Forest, Mississippi operates to empower local and state law enforcement with justification for violating the human rights of its Black and Brown communities. Sheriffs and judges function similar to a band of operatives, targeting and collecting “evildoers” and slotting their “crimes” into the narrative that speaks of local or national “security.”

The Scotts did not torture anyone; they did not kill anyone. But Jamie and Gladys are Black women in America!

The two sisters start out in their car on a December day in 1993 to purchase heating fuel. Along the way, they experience car trouble.
There was more trouble to come…

On December 24, 1993, Jamie (22) and Gladys (19), with 5 children between them, were arrested and charged with armed robbery. Three men, known as the “Patrick Men” because they are related, confessed to the crime of robbing a man of 10 dollars. But the men were coerced and threatened with Parchman prison were, as Sheriff Marvin Williams informed them, they would “be made out of women,” if they did not implicate the Scott sisters.

According to an affidavit by a trustee of the local jail, the wallet turned up 2 days later with a photo ID of the “victim” and 23 dollars, writes Nancy Lockhart, M.J., Legal Analyst and Grassroots Organizer. The trustee also claimed that a robbery did not take place, writes Lockhart.

It came to Lockhart’s attention that a “real” robbery did take place at a local restaurant. Two Black boys, according to witnesses, committed the crime. Yet, the sheriff approached the two owners (white women) to coerce them into pinning the crime on the Scott sisters!

In the meantime, there were more affidavits, as Lockhart discovered, testify to the innocence of Jamie and Gladys. The 5 witnesses, who provided conflicting stories in court, have all declared that the Scotts were not involved.

One of the “Patrick Men” wrote a sworn affidavit, Jamie explains, clearing her and Gladys. But the courts never heard the affidavit.

“The most devastating and unfair thing about this is [that] the police and investigators know we are innocent.”

The lawyers for the Scott sisters, Firnist J. Alexander, Jr. and Gail Shaw-Pierson failed to interview or subpoena witnesses, “only calling one when there were several,” writes Lockhart. No one heard from the sisters at trial. Why?

Alexander and Shaw-Pierson advised the sisters not to testify!

Evelyn Rasco, who had to leave the state of Mississippi, is providing for 5 grandchildren while she battles to free her two daughters.

Nancy Lockhart served as a community service consultant with Operation Push/Rainbow Coalition while she worked on her Masters degree in Jurisprudence at Loyola University Chicago. One day, a letter came across her desk. It was from Mrs. Rasco. As it turns out, Mrs. Rasco had written several letters to Congressman Jesse Jackson Jr. over the years, asking him to submit the letter to his father, Rev. Jackson. She never received an answer from Congressman Jackson or Rev. Jackson.

Nancy Lockhart has worked independently of any law firm or Black leadership to draw attention to this case. She does not receive pay for her efforts! Of this case, she writes, I am “convinced that a grave injustice had been wrought from the judicial bench. This injustice has proven to be the misrepresentation of poor Black women seeking justice in Mississippi’s legal system. Justice was denied.” Lockhart writes in Black Commentator.com, according to the Request for Commutation of Sentence and/or Pardon prepared by attorney Chokwe Lumumba, the Scott Sisters challenged their convictions on direct appeal; arguing that there was insufficient evidence to convict them, and the guilty verdict was against the overwhelming weight of evidence, which should exonerate them. The court of appeals found no error and affirmed the convictions on December 17, 1996. As a result, they filed a Petition for Writ of Certiorari to the Supreme Court, which was denied on May 15, 1997.

They consequently filed an Application for Leave to File Motion to Vacate Conviction pursuant to the Mississippi Post Conviction Collateral Relief Act. The Supreme Court also denied that application.
Attorney Chokwe Lumumba submitted a request for commutation of sentence and pardon to the governor. It was denied.

The informal informants, the one’s whose reaction to the exploitation and injustice of the Black masses is to first check with their bank accounts or/and their “political polls.” If the case is favorable to their political or social careers, then there’s a photo opt and maybe profits indirectly drawing from the attention to the corporate sponsored “organization” for the little people. If the case would harm their careers or link the corporate sponsored “organization” for the little people, then they simply ignore the case. In the process, they “inform” the American public, law enforcement and the judicial apparatus that this person or persons, case or incident is “criminal”-a sacrifice-in other words, for the advantages of the few Blacks in leadership positions.

Jamie and Gladys Scott’s case-a sacrifice-is not a high priority for the predominantly Black male leadership intent on playing “politics” and maintain their stakes in the system. Fred Hampton Sr. said once that without “political education,” we’ll have Black capitalists. Before you know it, we’ll have Black imperialism.”

The people must speak out against this injustice but also the continued practice of injustice against Black, Brown, Red, and Yellow people and call for an investigation and the immediate release of the Scott sisters! The people must confront the power of wealth.

Nancy Lockhart has begun a postcard campaign. If you send your name and mailing address, the participants at wrongfulconviction@gmail.com will forward these postcards to Gov. Haley Barbour requesting a review of the case and the immediate release of the sisters.

Jamie Scott #19197 and Gladys Scott #19142 have been incarcerated in the state of Mississippi 14 years and 6 months on double life terms each. No one was murdered or injured. Transcripts state that less than $12 dollars was possibly taken. All witnesses, including the alleged victims testified that The Scott Sisters were not involved in this armed robbery. This is a very excessive sentence to say the least. Governor Barbour please review this case and Please Free The Scott Sisters!

http://www.huffingtonpost.com/anthony-papa/the-scott-sisters-two-lif_b_169468.html
HuffingtonPost.com
The Scott Sisters: Two Life Sentences for 11 Dollars?
Talk about injustice. How do you wind up in prison serving two life terms for a robbery that netted 11 dollars? That question has haunted first time offenders Gladys and Jamie Scott for the past 15 years.
On December 24, 1993, Scott County Sheriff's Department in Mississippi arrested the sisters for an armed robbery they vehemently deny participation in. In 1994 they were convicted after being implicated in the crime by three young Black men who confessed to the robbery in exchange of a plea bargain that gave them 10 months. The sisters were not offered a plea and went to trial.
Time has passed slowly for these sisters as they watched from behind bars their five children grow into adults and mourned the lost of their father. They have felt the pain of exhausting all their legal remedies while being denied relief at every level.
According to Nancy Lockhart, M.J., a legal analyst who has worked tirelessly over the years to help set free the Scott sisters she says she will never forget the frigid Chicago morning when she opened a letter from Mrs. Evelyn Rasco, the mother of the Scott sisters. She told the story of her daughters and her plight to help free them. "How can they give my daughters two life sentences for a crime that netted 11 dollars where no one was injured?" This prompted Lockhart to become the Scott sister's lifeline for hope. She began a campaign to try freeing them.
The Scott Sisters challenged their convictions on direct appeal arguing that there was insufficient evidence to convict them and the guilty verdict was against the overwhelming weight of evidence, which should have exonerate them. The court of appeals found no error and affirmed the convictions on December 17, 1996. As a result, they filed a Petition for Writ of Certiorari to the Supreme Court, which was denied on May 15, 1997. They consequently filed an Application for Leave to File Motion to Vacate Conviction pursuant to the Mississippi Post Conviction Collateral Relief Act. The Supreme Court also denied that application.
In 1998 one of the sentenced men signed an affidavit telling that the Scott sisters were not involved with the crime. The affidavit along with two others that pointed to the sister's innocence were secured by their attorney and submitted for post conviction relief. Then attorney Chokwe Lumumba submitted a request for commutation of sentence and/or pardon to the governor. It was subsequently denied.
Gladys and Jamie Scott have maintained their innocence. They have spent nearly 15 years in prison for a crime they did not commit that netted the sum of 11 dollars. It is time for them to join their families.
For more information about the Scott sister's case please go to: www.freethescottsisters.com.
The Committee to Free the Scott Sisters: 641-715-3900 Ext. 99222
Posted by camron46 at 2:39 PM No comments: Links to this post

Jamie Scott of the Scott Sisters was able to call her mother tonight and report that thanks to all of the calls that came into the prison, she was seen by a doctor and is receiving medication. She stated that she was not seriously injured when she fell on the oil that was placed on the shower floor.

Although Jamie was able to receive insulin, she stated that she had been without her blood pressure medicine for several months due to there not being a generic version available that the state would pay for.

She wanted to make certain that each and every person who responded to our urgent calls for assistance knew how much she appreciated the overwhelming response and remarked it was noted by the staff there when she was seen for medical treatment.

Thank you especially from Mrs. Evelyn Rasco, who has felt a tremendous burden relieved by just being able to know that her daughter is not seriously injured, though still in unjust captivity.