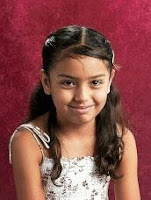 Brisenia, who was nine at the time, was murdered in her home by armed members of a right-wing paramilitary group. Right-wing militias, deaths squads and other such paramilitary organizations were relatively common in Latin America during the tumultuous 1980s, and their horrendous crimes and history of cruel human rights abuses are well known and have been extensively documented by human rights groups. What makes Brisenia's murder different isn't just that it ocurred more recently, but rather that it ocurred on American soil, and that the violent paramilitary organization that murdered her while she recoiled and wept, pleading for her life, was an American terrorist organization known as the Minutemen American Defense organization, a group whose founder, Shawna Forde, has well established ties to larger and better known anti-immigrant groups such as the Minutemen and FAIR, the Federation For American Immigration Reform (Forde once served as a spokesperson for FAIR).

It was no random act of violence. Shawna Forde, the suspected mastermind of the home invasion robbery in which Brisenia and her father Raul were killed, is the leader of the vigilante group Minutemen American Defense and has been tied to the national Federation for American Immigration Reform (FAIR). Both groups have been labeled by the Southern Poverty Law Center as “hate groups” and have a long record of routinely dehumanizing immigrants and vilifying Latinos.

The problem is bigger than FAIR or any other group. Some members of Congress have been legitimizing these organizations for years—inviting them to testify as “experts”—while the rhetoric coming from these groups has given rise to violence against Latinos, like the killing of Brisenia and Raul Flores. That needs to end now.

I’ve joined Presente.org in demanding that Congress renounce FAIR, the Minutemen, and other anti-immigrant hate groups. Please click below to join me, and ask your friends and family to do the same:

FAIR and the Minutemen groups are regularly quoted in the mainstream media—FAIR more than 500 times in 2008—giving them a megaphone to broadcast their hateful rhetoric: like FAIR executive director Dan Stein’s claim that “illegal aliens are more prone to criminal activity than the rest of the population,” or Minutemen co-founder Jim Gilchrist’s assertion that it is “okay to say ‘rapist,’ ‘robber’ and ‘murderer’” when describing “illegal aliens.”

As vile as their rhetoric is, even more disturbing is when our elected representatives applaud their efforts and parrot their messages. Take Ranking Republican Congressman on the House Immigration Sub-Committee, Rep. Steve King (R-Iowa), a long-time friend of extremist groups, who wrote that a day without immigrants in America would mean “the lives of 12 U.S. citizens would be saved who otherwise die a violent death at the hands of murderous illegal aliens each day.” Those debunked claims were then repeated hundreds of times by FAIR and others, creating an echo chamber of racism and hate.

Or take Senator Jeff Sessions (R-Alabama), the ranking Republican on the Senate Judiciary Committee, who has likened immigrants to terrorists and child molesters, as well as taking money from a group with white-supremacist ties.

Elected leaders like these, together with their allies in extremist anti-immigrant groups, create a climate of hatred that leads to violence – as evidenced by a recent string of hate-motivated killings across the country .

Enough is enough. Please join me in holding members of Congress accountable by demanding they stop legitimizing FAIR and the Minutemen. It takes only a moment:

The American political scene has recently been dominated by a dark and dangerous undercurrent of nativist, anti-immigrant demagoguery served up by irresposible propagandists such as CNN's Lou Dobbs and Fox New's Bill O'Reilly and race-baiting politicians such as U.S. Congressman Tom Tancredo among many, many others.
Posted by camron46 at 4:48 AM No comments: Links to this post