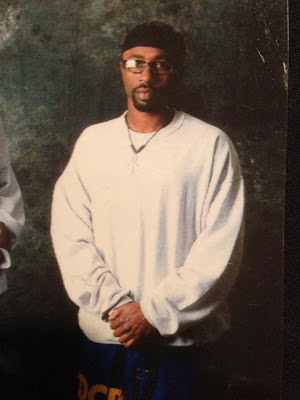 My Name Is Terrell Curry

On October 24, l998, I was arrested for something I did not do. That night I was in the car with two other individuals. There were guns in the car and we stopped in front of a house for five minutes before pulling off, deciding not to comit a crime. As we turned the corner to head home some guys standing on the corner began shooting at us from behind, one of their bullets spider webbed the back window and put a hole in the front wind shield. The passenger hung out the window and fired a few rounds in the air to scare the guys off. As we passed a street there was a sheriff patrol car parked several houses from the corner. The patrol car started to follow us without their lights on. As we turned down a street called Butler, I heard a pop in a distance and the patrol car activated their red and blue sirens. Due to it raining earlier that night and the roads were wet and slippery. The car spun out at the intersection of Myrrh st. and Lime st. and was now facing the patrol car off to the side in the next lane. We attempted to pass by the patrol car and this is when they began shooting multiple rounds (16 shots) at us. I ducked down in hopes of not being shot by the deputies who were trying to kill us.
The car crashed at the corner. The other two individuals and myself jumped out. The car and ran in different directions. Me and one guy ran south and the other guy with the ponytail (who they thought was a female) ran north. The first guy was arrested then I was. The guy who they thought was a female was never caught. They were searching for this female suspect that night. The deputies broadcast over their dispatch radio to the responding officers that they were searching for a female with a ponytail, because the responding officers were asking "where is your homegirl," (a term for female friend) who ran from the suspects car. This was evidence at one time that existed before they tampered with the evidence. I first learned that I was being charged with attempted murder on two Sheriff deputies when I received a copy of the charging complaint while in custody, two months after my arrest. I couldn't believe the charges because no one ever shot at the deputies. It was a surprised to me.They never found a female suspect, because the deputies wrote a false police reports stating there was only two male suspects who exited the car and fled the scene, omitting the existing female suspect. I was made out to be the one who did all the alleged shooting. Despite the evidence showing it being physically impossible to do all that was alleged due to my disability, which wouldn't allow me to perform the impossible feats that the deputies claimed I did with an assault rifle hanging out a car window.

One year prior to the night of my arrest, I suffered a C-7 fracture killing the nerves in my right arm and shoulder, which resulted in paralysis in my right arm, rendering it useless. The deputies testified that they saw me in the passenger side of the car, hanging out the window with an assault rifle firing at them as the two cars were head-to-head off to the side lane. This would have been impossible with my disability condition.


Testimony from a neurosurgeon appointed at the trail:

At trial on my behalf, expert testimony from a neurosurgeon appointed by the court showed how I would be incapable of using my arm to utilize a machine gun rifle as the deputies stated they saw. Further testimony from a ballistic expert produced evidence to the effect that there was no way that anyone couldhave shot at the deputies from inside the car as they followed from behind. Based on the trajectory examination that the LASD conducted of the suspect's car. The LASD expert confirmed this evidence as well. The ballistic expert further stated I couldn't have held the rifle and fired it with my one left arm balancing myself in the manner testified by the officers. The rifle requires two hands to use.


The prosecutor, Darren R. Levine, told me He knew I couldn't have done what was alleged:

The prosecutor, Darren R. Levine, told me at one of my court hearings that he knew I couldn't have done what was alleged, but if I didn't tell him who the female was that got away, he would prosecute me to the fullest.I went to several court appearances for 3 years fighting this case. After 2 years, I decided to represent myself in August 2000, because the lawyer I had at the time, Frank Digacaimo, no longer had my best interest. Before the trial, I pursued the testing of the authenticity of the first MDT tape because when I received the transfer of evidence from the attorney Mr.

Digaciamo, the MDT tape was altered omitting the mention of the female suspect. This MDT tape now said only 2 suspects exited the car. I know this because when I first was arrested the attorney visited me at the jail and let me hear the MDT tape. All the documents and evidence was delivered to a third party before I received it from the attorney. At a court hearing in May 2001, the prosecutor, Darren Levine, admitted in open court that the MDT tape did exist which made mention of a female suspect who exited the car. This admission prevented the court from granting the funds for testing because the tape existed. The court ordered the prosecutor to turn over that MDT tape. I never received the un-edited MDT tape. The original MDT tape with the female suspect reference was still not disclosed at trial.
At the start of trial in June 2001, a different prosecutor took the case who did not know anything about disclosing the existing MDT tape previously admitted by Mr. Levine in open court. I complained to the judge, but to no avail. Trial proceeded without the evidence, against my objections. I again made issue of this MDT tape at the sentencing hearing in August 2001.I pursued the disclosure of the original MDT tape even after being convicted. I tried to raise this issue myself on a habeas corpus in September 2001, but was denied by the Appeals court who said the issue has to be addressed on direct appeal by the appellant attorney, William Flennekin, Jr., who was appointed to me by the court. He never raised this issue in my appeal, even when I asked him to.

I again filed another habeas corpus in the state court when my direct appeal was concluded, because the direct appeal attorney Mr. Flennekin did not raise this issue. I exhausted my writ through the state court.The state or county of Los Angeles Superior court destroyed the exhibits that was admitted into evidence at trial, this included the original MDT tape in question that was tampered with. No authority contacted me or my attorney to give notice that they were going to destroy the MDT tape exhibit.

In 2004, my family hired an attorney, Frank Duncan, to file a habeas corpus in federal court to review the unconstitutionality of my conviction, challenging the misconduct by the prosecutor regarding the false evidence and testimony surrounding the MDT tape that was tampered with. Mr. Duncan failed to properly address the matter. The U.S. Ditrict court judge denied my petition, missing the point of the argument, international side stepping the issue. I tried to contact Mr. Duncan between May 2005 and September 2005, so he can argue the important point of how the credibility/exculpatory evidence [the MDT tape] effected the outcome of the trial in the traverse, (opposition papers) before submitting to the judge. Mr. Duncan ignored all letters from me, and calls from my family for months. The judge ruled against me without the correct argument being presented. I wrote the attorney several times without a response from him. In December 2006, I filed a complaint with the California State Bar against the attorney Mr. Duncan because he failed to keep me informed on the case, failed to return my family's phone calls, or answer my letters. He also refused to send me the files regarding my case, even after I made several request. When I learned that the District Court made their ruling on my case and the attorney's work was concluded, he still failed to forward the files. The California State Bar had to order him to send me the file on my case sometime in the end of 2008, some several years after the case was closed. I was kept in the blind for several years.On or about October 2007, I found out that the Ninth Circuit Court of Appeal had already ruled on my case.

Two years after their order, on my own behalf [In Pro-Se], I then prepared a Federal Rules of Court, Rule 60(b) motion, and an Equitable Tolling motion, and filed it on January 9, 2008, with the U.S. District Court, Central District of California (case #cv-04-01344 GPS (PLA)). That court granted equitable tolling, heard and denied the 60(b) motion on October 05, 2008. Even after explaining in my equitable tolling motion they granted, the problems with the attorney Frank Duncan, the court still mailed the court order to the attorney, failing to inform me of their decision. For this reason, I missed important time limits I had to meet to file an appeal with the Ninth Circuit Court, who also denied my motions for relief, and again mailed their court order to Mr. Duncan, when I was acting In Pro-Se, on my own behalf. One of the major points that must be mentioned here is that, even though my case is classified as an attempted murder, not one person was injured, let alone suffered a scratch, yet I was convicted to serve 2 terms of 15-Life sentences, plus 45 years, to be served consecutively.


These are a few of the many obstacles in the struggle for justice and freedom in an unjust system.

Any help that can be provided would truly be a blessing.


Life without parole, is a judgment that says, this person is beyond hope, beyond redemption,beyoned rehabilitation. “Prejudices are what fools use for reason. Terrell Curry is is an innocent man in p…
Posted by Shai Dune on January 19, 2013 at 6:31am

Life without parole, is a judgment that says, this person is beyond hope, beyond redemption,beyoned rehabilitation. “Prejudices are what fools use for reason. Terrell Curry is is an innocent man in prison, that is fighting for justice since 14 years, he was sentenced to two life plus 45 years without the possibility of parole, no one was hurt or killed in his case
The government is the potent omnipresent teacher. For good or ill it teaches the whole people by its example. Crime is contagious. If the government becomes a lawbreaker, it breeds contempt for law; it invites every man to become a law unto himself; it invites anarchy. To declare that the end justifies the means -- to declare that the government may commit crimes -- would bring terrible retribution."american prison industrial complex system, is the Mother of evil, that is happening in America.

Posted by camron46 at 1:49 AM No comments: Links to this post